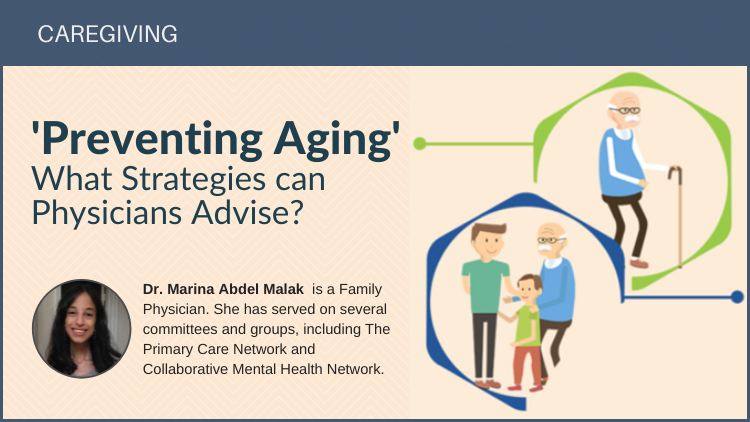 is a Family Physician in Mississauga, Ontario. She has served on several committees and groups, including The Primary Care Network and Collaborative Mental Health Network. She has a passion for medical education, patient empowerment, and increasing awareness about the relationship between mental, emotional, and physical health. Dr. Abdel Malak is highly involved in quality improvement initiatives, and her research interests include strategies to support physician wellness, patient self-management, and optimizing physician education. 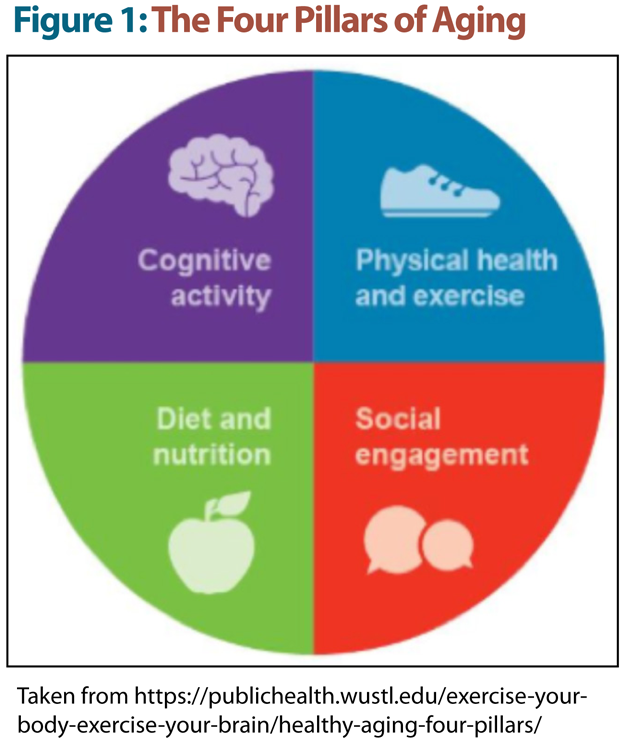 Abstract
Neural plasticity in the context of normal aging and dementia can be evaluated on a number of levels. Traditionally there has been much focus on cellular dysfunction, which is evidenced by the plaques and tangles that are the hallmarks of Alzheimer type dementia. Now, more than ever, there is an emerging spotlight on the preservation of functional levels despite failing cognition be it from normal aging, mild cognitive impairment (MCI) or diagnosed dementia. Neural plasticity can be viewed as the complex interaction between the neurons' electrical, biochemical and physical structure and the individual's behavioural, psychological and sociological activities.1 This article will briefly review the neurobiology of cognition and the sequence of events that lead to its demise. The remainder of this review concentrates on tangible, evidence based strategies to uphold clinical cognition through the aging process.
Keywords: neural plasticity, aging, dementia, cognition, neurons.

…there were neurons in her head, not far from her ears, that were being strangled to death, too quietly for her to hear them. Some would argue that things were going so insidiously wrong that the neurons themselves initiated events that would lead to their own destruction. Whether it was molecular murder or cellular suicide, they were unable to warn her of what was happening before they died.

Members of the College of Family Physicians of Canada may claim one non-certified credit per hour for this non-certified educational program.

Abstract
Type 2 diabetes mellitus is increasingly common, and previously unrecognized complications are emerging; namely, cognitive impairment and dementia. The mechanisms that link these factors together are still unknown, but likely result from the interplay of several variables, including vascular change, poor glycemic control, inflammation, and hypothalamic pituitary adrenal overactivity. At present, it is still too early to propose best practices related to the management of diabetes-induced cognitive change. All things considered, however, patients should be aware that proper management of metabolic and vascular complications may minimize the adverse effects of type 2 diabetes on cognitive function and quality of life.
Keywords: type 2 diabetes, cognition, dementia, vascular, metabolic.

The Hidden Cost of Cognition: Examining the Link Between Dual-Task Interference and Falls

The Hidden Cost of Cognition: Examining the Link Between Dual-Task Interference and Falls

Members of the College of Family Physicians of Canada may claim one non-certified credit per hour for this non-certified educational program.

Abstract
“Accidents” (specifically falls) are a major contributor to death among older adults (defined as individuals over the age of 65). Falls contribute to ongoing mobility issues, and make it difficult for individuals that have sustained a fall, or who are at significant risk for a fall, to live independently.
Keywords: cognition, falls, dual-task interference

There has been a substantial increase in total cases of diabetes mellitus in industrialized countries among older adults. Diabetes mellitus has been increasingly recognized as a risk factor for cognitive impairment and dementia. This article discusses the epidemiological evidence for diabetes to predict Alzheimer’s disease, vascular dementia, and decline in various domains of cognition. We also address the features of diabetes-related executive dysfunction and its importance in the clinical care of diabetic older adults.
Key words: diabetes mellitus, cognition, Alzheimer’s disease, vascular dementia, frontal executive dysfunction.

Stroke and dementia are major health problems affecting older people. Cerebrovascular disease is the second-leading cause of dementia after Alzheimer’s disease, the third- leading cause of death, and one of 10 leading causes of physical disability. In parallel with the increased prevalence of stroke in aging populations and the decline in mortality from stroke, the rate of diagnosed poststroke dementia has increased, causing a growing financial burden for health care systems. This article discusses the epidemiology, etiology, and determinants of poststroke dementia and outlines the search for a suitable treatment.
Key words: dementia, stroke, cognition, risk factors, cognitive impairment.

The Relationships Between Alcohol and Dementia

The Relationships Between Alcohol and Dementia

In recent years, a number of observational studies have shown that when consumed in moderation, alcohol may contribute to healthy living, reducing the risks of both coronary artery disease and dementia. While the ill effects of excessive drinking on cognition have been extensively described, there are no clinical or pathological consensus criteria defining alcohol-induced dementia. In fact, its existence as a distinct entity is controversial. More research on the effects of alcohol on the brain is needed in order to advise patients on the potential risks and benefits of alcohol consumption.
Key words: alcohol consumption, dementia, prevention, cognition, Wernicke-Korsakoff.

Are structural changes in the brain a normal byproduct of the aging process? This complex question can be addressed by separately evaluating the contribution of four commonly observed changes--cortical atrophy (increased sulcal cerebrospinal fluid), central atrophy (ventricular enlargement), deep white matter hyperintensities (DWMHs) and periventricular hyperintensities (PVHs)--all of which can be categorized as forms of subclinical structural brain disease (SSBD). Although these structural changes predominate in demented and depressed patients, they also have been implicated as features of normal aging. However, the mechanism by which these changes contribute to cognitive decline has yet to be elucidated.

In a cross-sectional study, Cook and colleagues examined the relationship between structural changes, age, cognition and the connectivity between brain regions. A combination of magnetic resonance imaging (MRI), neuropsychological testing and quantitative electroencephalographics (QEEG) were used to asses SSBD volumes, cognition levels and functional connectivity, respectively.

The study involved 43 healthy subjects aged 60-93 years. The brains of the recruits were scanned using MRI to measure the volumes of specific tissue and fluid types. QEEG coherence was calculated separately in the prerolandic and postrolandic regions to evaluate the degree of connectivity between brain regions via well-recognized neuroanatomical pathways. The Trail-Making Tests (Trail A to measure attention and processing speed; Trail B to measure sequencing ability) were among many of the neuropsychological tests employed.

A linear relationship was established between age and central and cortical atrophy and between age and PVHs, but was not seen between age and DWMHs. While the general trend was towards greater SSBD volume in older subjects, many subjects older than 75 in fact displayed smaller SSBD volumes than their younger counterparts. Furthermore, a greater variability in SSBD volume was observed with increasing age. Thus, this result on its own is somewhat uninformative.

As hypothesized, increased SSBD volume was found to correlate with an overall decrease in cognitive function. This result was most strongly evinced in Trails B, a test involving a series of processing steps, suggesting that structural changes in the aging brain may make multi-stepped processes more difficult, while exerting a less noticeable impact on simple tasks. QEEG recordings demonstrated that increasing PVH, DWMHs and ventricular cerebrospinal fluid (vCSF) were associated with lower coherence levels in both prerolandic and postrolandic networks.

Finally, a path analysis model demonstrated a mediation role for connectivity disruption in the effect of white matter disease on cognition, but failed to confirm the same association for atrophy.

Overall, these results support the notion that increased SSBD volume negatively affects cognition via neuronal connectivity disruption in normal aging. To further bolster this theory, future research might explore the results from task-activated QEEG recordings, rather than the resting-state EEGs that were used in this study.

Introduction
A variety of important biological, physiological and psychological functions show regular peaks and declines across 24-hour cycles. Such rhythms are present in plants and animals, from the cellular level to the level of organs and even entire organisms.1 The characteristics and implications of these circadian rhythms have been the focus of a growing body of literature in the fields of chronobiology, chronopathology and chronotherapy. For example, because of underlying circadian rhythms in cortisol concentration in the blood stream, histamine, epinephrine, pulse rate, blood pressure and clotting factors, treatment efficacy varies with the time of administration for diseases such as arthritis, asthma, cancer and cardiovascular disease.2-5 Recent work in the newly emerging area of chronocognition also shows that behavioural efficacy varies depending on the time of administration of tasks.6 Of special relevance is the clear suggestion of age differences in circadian arousal patterns, differences that raise a number of important issues for both research and clinical practice, including what patients are likely to understand and remember from a medical appointment.