Dr. Karen Fruetel emphasized in her review of the physiological changes accompanying aging that attributes of “normal aging” have been derived from clinical studies. The studies are either cross-sectional, meaning that health markers are derived from comparisons between predefined aging cohorts, or are longitudinal studies that follow the same individuals over a number of years. Both types have their biases. Cross-sectional studies may falsely overlook confounders (e.g., comparing 20-year-old and 80-year-old study participants may overlook the fact that the latter were more likely to have smoked than today’s youth). Data from longitudinal studies are generally thought to be more robust, but such data may reveal selection biases (e.g., higher educational and/or socioeconomic status). Obtaining information on the true physiological consequences of aging is a challenge.

Dr. Fruetel commenced with a review of aging’s effects on the cardiovascular system. Autopsy studies suggest that advanced age is associated with increased left ventricular (LV) mass. Studies also show increased myocyte size and decreased number, and focal proliferation of the matrix in which myocytes reside. There is increased collagen cross-linking. As for systolic function, there is little change when at rest. However, there is decreased beta adrenergic stimulation. Exercise elicits altered effects: there is decreased exercise-related increase in heart rate and contractility, and peak cardiac output is blunted by 20–30% in response to maximal effort.
Maximal ejection fraction (EF) decreases during exhaustive upright exercise. Fundamentally, with age, systolic volume is preserved over a range of physical demand.

Dr. Fruetel then reviewed age-related qualitative change to the arteries (Figure 1). Structural alterations occur such that irregularities appear in the size and shape of endothelial cells. There is fragmentation of elastin and the arteries become longer, wider, thicker, and stiffer. Data from the Baltimore Longitudinal Study of Aging (BLSA) found a 20% increase in the size of the aortic root. Further, BLSA figures show carotid wall intimal medial thickness increases 2–3 fold. 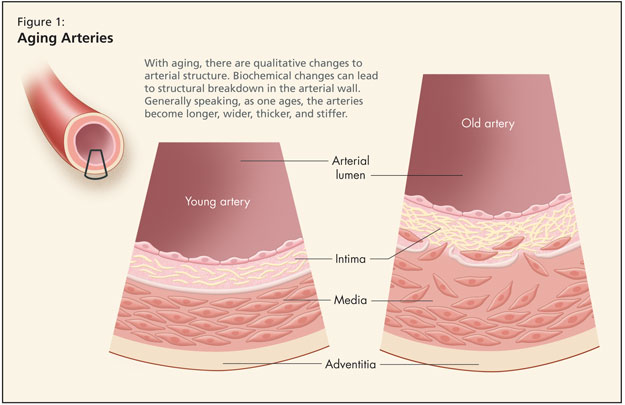 Looking at biochemical changes in the cardiovascular system, there is decreased production and release of nitric oxide. When nitric oxide enters a cell, it relaxes blood vessels, curbs abnormal growth of vascular muscle, prevents platelets and white blood cells from adhering to vessel walls, and binds to free radicals. Dr. Fruetel noted that some researchers consider decreased availability of nitric oxide in the endothelium as one of the earliest signs of arterial aging and a pathological sign of atherosclerosis. Other key biochemical changes include increased angiotensin II with age, and an increase in inflammatory markers.

Moving from altered biochemical structure to arterial functions, she noted the effects of these changes (such as increased IM thickness, disruption of elastin, increased collagen, reduced nitric oxide, more angiotensin II) as collectively resulting in increased arterial thickness. The resultant changes manifest as increased systolic BP and decreased diastolic BP, changing pulse waves, and increasing afterload. Pulse wave velocity is thus altered: the greater the arterial elasticity, the slower the pulse wave velocity should be. Increased velocity has consequences as vessels have both a conduit and cushioning function. Greater pulsatile flow translates to increased risk of damage to organs such as the brain and kidneys due to increased afterload. Such physiological changes, along with the effects of diabetes, hypertension, smoking, and hyperlipidemia, lead to increased prevalence of cardiovascular disease among older adults.

Dr. Fruetel then detailed some changes to the gastrointestinal system with age. She discussed physiological anorexia of aging, a state in which consumption and caloric requirements drop with age. This state is multifactorial in origin: older adults’ smell is decreased; they experience more rapid satiety with reduced leptin levels (especially in males); their prevalence of dysphagia rises, partly due to decreased salivation but more generally due to medical illness and medications; and they experience more esophogeal problems as well as altered gastric emptying with advanced age, associated with gastrin and pepsinogen. Older individuals are more prone to gastric damage due to increased susceptibility owing to lower gastric prostaglandin levels, and thinner mucosal gel. There is no change in gastric emptying below a certain caloric level, nor change in colonic transit times. Gastrointestinal absorption is slightly changed, with reduced absorption of key vitamins and nutrients such as folate, B12, vitamin D, and calcium.

As for the liver, its size is reduced by one-third due to decreased hepatic cell regeneration and reduced blood flow, and while there is less mitochondria, activity is unchanged. In terms of function, there is no change in bilirubin or liver enzymes, and albumin levels are normal or only slightly decreased. Drug handling by the aging liver is slightly altered due to declines in hepatic metabolism, associated with decreased liver mass and decreased hepatic blood flow. Animal studies have shown reduced hepatic content of cytochrome P450; one human study found progressive decline in P450 levels with a 30% decline by age 70. Unlike the liver, the pancreas shows no change in size, but the volumes of duodenal secretion decline, as does insulin production, leading to issues of glucose intolerance.

Finally, Dr. Fruetel described age-related change to the human respiratory system. While Dr. Fruetel acknowledged the need for further investigation, some reliable data are available. Studies show that change occurs in the epithelial lining based on bronchial alveolar lavage cell populations, with a higher percentage of polymorphonuclear leukocytes but lower macrophages. There is an increased ratio of elastin to collagen, leading to increased lung compliance; further, there is decreased chest wall compliance due to calcification of cartilaginous articulations around the ribs, sternum, and spine. Airspace size increases but there is loss of surface area and an overall decline in the number of capillaries per alveolus.

Spirometry shows that FEV1 declines 0.3 l per decade; FVC declines are somewhat less. Residual volume increases, but the total lung capacity remains the same. Generally, studies show that peak expiratory flow changes; most age-related changes are in expiration and not the inspiration phase.

There is evidence of reduced muscular strength, with diaphragmatic strength reduced ~25%. Due to changes in the rib cage, older adults experience reduced respiratory strength. There is an increase in so-called dead space ventilation. Studies of aerobic capacity in fit vs. sedentary older individuals have found decreases in VO2 max, a drop experienced universally but at greater degrees in the nonfit. However, researchers have been able to produce improvements (up to 15%) in VO2 max in response to exercise training.

As for altered pulmonary defences, Dr. Fruetel described decreased mucociliary clearance with age as well as depression of the cough reflex among older adults when exposed to a noxious substance, compared to a younger cohort. Studies of older adults who inhaled noxious substance found that older individuals require a higher stimulus level to cough and may experience altered central nervous system perception of bronchoconstriction.