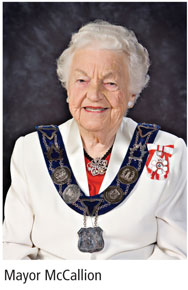 Dr. Jenny Ingram introduced Her Worship Hazel McCallion, Mayor of Mississauga. Calling her “a true pioneer,” Dr. Ingram stated that after 11 consecutive elections and 31 years in office, Mayor McCallion is the longest-serving elected municipal politician in Canada, an inspiration to women executives, and has achieved a success that community leaders everywhere wish to parallel. Given her longevity and vivacity, Dr. Ingram observed, Mayor McCallion personifies the Canadian Geriatrics Society’s motto “Adding years to life and life to years.”

Mayor McCallion acknowledged that the challenges encountered by seniors are great, quoting Bette Davis: “Old age is no place for sissies,” and called CGS “a great organization” that has served older people well. However, the mayor also adheres to the adage, “You’re only as old as you think” and noted that while she is 88 years old, she experiences the same overall good health and vigour she felt in her thirties. She acknowledged that genetics might be thanked, but is of the conviction that sound living and preventive measures achieved by wise health habits is where most credit is due.

Mayor McCallion offered Mississauga as an example of a city that both recognizes the challenges that can accompany aging and accommodates them. She strives to promote seniors’ unique contribution to civic and social life. The city commissioned a study to devise ways to prepare for an expected shift in demographics that mirrors changes in other Canadian municipalities and many other communities worldwide. Over the next 20 years, the portion of city residents aged 55 and over is expected to rise to close to 40%, and a strategic plan to respond to this challenge, a 10-year planning study called the Older Adult Project, has been undertaken.1

Mississauga is investigating elder-friendly modifications to the community, which aim to facilitate active and healthy living. The study is examining improving accessibility, public transit and other mobility choices, concentration of vital services, public spaces and parks, and availability of community and recreation programs, among other areas. The overall principle is to ensure that “services, facilities, and programs are more accessible and responsive to the specific needs of older persons.” Additional focus is on features that enable seniors to remain physically active; in 2008, Mayor McCallion bicycled seven kilometres to Mississauga City Hall to raise awareness about the importance of remaining fit.

The mayor concluded her address by sharing poems and anecdotes from which she has drawn inspiration and support. Her final offer of advice concerned the importance of a positive attitude to how one experiences advanced age. However, she made a special point of acknowledging the essential services that geriatricians provide to seniors. She thanked the Canadian Geriatrics Society for its 29 years of service and its efforts to “put older citizens back into action.”