Dr. Patrick Dehail focused on the mechanisms and functional impact of and therapeutic approaches to sarcopenia and muscle aging.

Defining Sarcopenia
Sarcopenia is a progressive process of age-related muscle mass (MM) loss. Its prevalence is high, from 10-24% in 65-70-year-olds to over 30% in those over 80 years old.

Sarcopenia is characterized by a muscle mass index (MMI) (appendicular skeletal MM [kg]/height2 [m2]) at least two standard deviations lower than the MMI in a younger population.1 A threshold that takes into account muscle performance and describes MM loss that has a functional impact is of the greatest utility.

In older adults, MM loss is associated with increased fat mass. It is important to take these two processes into account because fat mass affects the consequences of sarcopenia.

Age-related Changes and Mechanisms Involved in Muscle Tissue
Sarcopenia is associated with muscle tissue changes such as a decrease in the number and atrophy of type II skeletal fibres, while type I fibres are more preserved (Figure 1). At the molecular level, aging is associated with a decreased expression of myosin heavy chain (MHC) IIa and IIx isoforms, while the level of expression of MHC I tends to remain constant. There is an increase in the total number of hybrid fibres coexpressing various MHC isoforms.
Mechanisms involved in muscle aging include motor unit changes, inactivity, and the dysregulation of muscle protein synthesis and apoptosis. 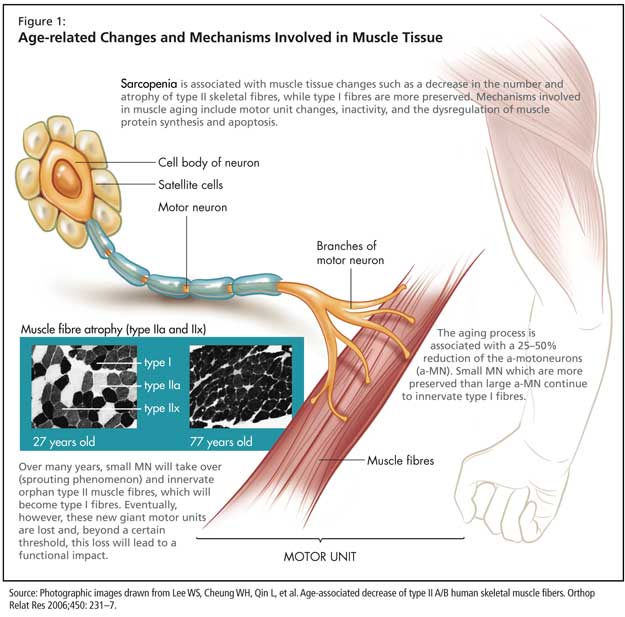 The aging process is associated with a 25-50% reduction of the a-motoneurons (a-MN). Small MN, which are more preserved than large a-MN, continue to innervate type I fibres. Over many years, the loss of large a-MN is compensated by a sprouting phenomenon: small MN will take over and innervate orphan type II muscle fibres, which will become type I fibres. Eventually, however, the new giant motor units constituted through the sprouting phenomenon are lost and, beyond a certain threshold, this loss will lead to a functional impact.

Inactivity is viewed as an etiologic factor of sarcopenia. However, it is not known whether inactivity is the consequence of neuromuscular changes (adaptation) or a factor contributing to these changes.

Dr. Dehail described the dysregulation of muscle protein synthesis as playing an important role in sarcopenia. Splanchnic sequestration diverts amino acids to the liver or the intestine. Secondly, insulin resistance, which is more prevalent in older adults, plays a role essentially by increasing proteolysis of muscular proteins. A decreased level of metabolic hormones (testosterone, GH-IGF1 axis, DHEA) also contributes to this dysregulation. Finally, the elevated level of proinflammatory cytokines (in particular, IL6 and TNF-a) seen in older adults stimulates proteolysis. Additionally, decreased MGF levels (a factor that stimulates the pool of satellite cells), and increased level of myostatin (a muscle growth inhibitor) and apoptosis also contribute to sarcopenia.

Malnutrition, anorexia, and decreased vitamin D and vitamin D receptors (VDR) levels are common in older adults. Prevalence of vitamin D deficiency exceeds 90% in hospitalized older adults. Vitamin D affects protein synthesis and the functional capacity of muscle tissue. There is a correlation between the levels of 25-hydroxyvitamin D (25-OHD) and loss of muscular strength. Visser et al. showed that subjects with a 25-OHD level <25 nmol/l were more likely to lose their grip strength at 3 years. The decline of the circulating levels of 25-OHD was also associated with the decrease of walk speed and time to stand.2

The threshold of functional decline varies among individuals and also depends on the functional task. However, some authors suggest that there are clinical thresholds under which most persons will experience difficulties. For example, Janssen et al. showed that a MMI below 5.75 for women and 8.5 for men correlates with a higher risk of functional impairment.3 Ploutz-Snyder et al. calculated the ratio of knee extensors isometric strength/body weight, and estimated that a ratio below 3 Nm/kg was associated with a decline in functional ability, especially with locomotion (walk, stair climbing, sit-to-stand).4 Lauretani et al. suggest an even simpler method, where an isometric hand grip strength below 30 kg for men and 20 kg for women can allow to identify older persons with a decline in walk time or locomotor ability.5

From a functional point of view, loss of muscle power is more important, Dr. Dehail explained. It is required in many important basic activities such as sit-to-stand, stair climbing, or walking. Muscle power is extremely useful in loss of balance situations (falls) where a posture adjustment is necessary, and allows the older adult to remain functionally independent.

Aging is also associated with a reduced muscle quality (defined as the ratio of muscle strength/muscle mass). Voluntary movements are affected by the degradation of central drive conductivity and an increase in agonist-antagonist coactivations.The rheologic properties of skeletal muscle are also modified, with a prolongation of muscle contraction and half-relaxation times. Decreased tendon stiffness will lead to a poorer transmission of muscle strength to the motion segment.

Finally, Dr. Dehail ascribed particular importance to the ability to maintain a contraction level during sustained effort. Dr. Dehail and colleagues compared the “endurance coefficient” (EC) (ratio of the last three isokinetic muscle contractions strength/first muscle contraction strength) and the changes in loss of muscle strength in older and younger adults.6 Interestingly, the oldest and most fragile adults (mean age: 85) did not have a loss of strength, and their EC was close to 1. Older individuals (mean age: 75) showed an EC of 0.92, compared to 0.85 in young subjects (students). In fact, during a sustained effort, younger adults will first use type II fibres before switching to type I fibres. Older and hospitalized adults will use type I fibres from the beginning, giving them an endurance coefficient close to 1.

During the first 3 weeks, results improve with no nervous or muscular adaptation. From weeks 3 to 6, strength gain is the highest, mostly due to an adaptation of the motor units (better recruitment, firing rate, and synchronization) and a decrease of muscular coactivations. From weeks 6 to12, muscular adaptations prevail (slight increase of MM and slight fibre hypertrophy). Beyond 12 weeks, no further gain is attained, but strength is maintained as long as the older adult continues training at the same schedule.

In a systematic review, Latham et al. showed that older adults who follow a resistance strength training program gain significant muscle strength (20 to 200% increase of the 1 MR [maximal repetition], according to various studies).8
Resistance strength training improves muscle strength and power, and more modestly walking time, and sit-to-stand time, and lowers the risk of falls. However, the impact on ADLs or quality of life are unknown. Nutritional supplementation is also important and improves the results, especially in malnourished older subjects.

Drugs
According to Dr. Dehail, testosterone and growth hormone (GH) only improve muscular performance in hypogonadal individuals or individuals with a GH deficiency. DHEA shows no benefits in terms of muscular performance. Vitamin D lowers the risk of falls, but this benefit does not seem to be linked to improved muscle strength or power.

ACE inhibitors may be beneficial. An observational study showed favorable effects on muscle strength and mass. Controlled studies are needed for confirmation.

Other molecules are being studied, such as SARMs (selective androgen receptor modulators), myostatin antagonists, or some amino acids (leucine).

Conclusion
Sarcopenia is correlated with higher functional impairment of ADLs, and a higher risk of falls, physical frailty, and dependence. It is also associated with higher mortality, especially in sarcopenic hospitalized older adults, as they show a higher incidence of nocosomial infections.

Sarcopenia is associated with a clear increase of health care costs (about $900 extra per older patient/year in the US).