Dr. Shabbir Alibhai addressed changes in the immunological and haematological systems with aging, and their clinical implications.
He emphasized the relevance of homeostenosis, defined by GE Taffett as a hallmark, progressive constriction of homeostatic reserves that occurs with aging (i.e., decreased ability over time to deal with external perturbations or stresses). All systems age and become dysregulated, with magnification of adverse processes. He accentuated that age effects on parameters of health vary significantly and increase with advancing age; further, the contribution of behavioural and environmental factors on health is not fully understood. He further cautioned that the challenge in identifying the best normal aging model in humans should not be underestimated, nor the role played by selection bias in published aging studies.

Dr. Alibhai noted his focus on B-cell and T-cell lines, which interact significantly in the immunological system. Dr. Alibhai stated that much that is known in this area is derived from extensive in vitro work. In vivo research into immunology is clearly more difficult to obtain; problematically, in vitro handling may lead to altered and destabilized cellular functions. Some in vitro findings have limited clinical relevance or unverified implications. Finally, animal model findings are variably duplicated in human studies.
The immune system comprises both innate and adaptive or acquired immunity (broken down into cellular and humoral components). Dr. Alibhai noted the artificiality of the distinction given the complexity of the B-cell and T-cell relationships in the setting of infection and other immune dysregulation syndromes.

Dendritic cells are of key importance to initiating immune response and as antigen-presenting cells; they deliver activation signals to T-lymphocytes. Human studies have generally shown equivalent antigen-presenting ability in older as in younger humans, as well as equivalent ability to induce T-cell proliferation.

Next he spoke to the role of macrophages, which activate early in immune defense. There is evidence of impaired function with age, of consequence given their role in phagocytosis and intracellular killing, and as antigen-presenting cells to the rest of the body. With age there is both more nonspecific activation yet decreased capacity to produce tumour necrosis factor (TNF), interleukin (IL)-1, and nitric oxide (needed to inhibit tumour growth and stimulate immune defenses). Dr. Alibhai described them as functioning “in overdrive”; their dysfunction may contribute to delayed wound healing.

Dr. Alibhai then detailed the role played by natural killer (NK) cells, which kill target cells spontaneously without activation. Whether NK cell number or activity changes with age is unclear. To activate NK cells, higher levels of interferon a for maximal activation may be needed.

Finally, the complement system is important to the functioning of the innate immune system. Dr. Alibhai described this as an enzyme system that catalyzes other reactions, through cytolysis, activating the inflammatory cascade. The complement system exemplifies homeostenosis, as when an older animal is inoculated, the complement pathway does not arise with maximal efficiency.
The complement system itself is 20 interacting plasma proteins that constitute an enzyme system that defends against micro-organisms through cytolysis, opsonization, and activation of inflammation. There are slightly higher levels of certain components of complement with aging, but with bacterial infections complement levels do not rise in older adults, the consequence being a blunted response to infection.

Shifting focus to adaptive immunity, Dr. Alibhai defined the central players as B- (that is, bone marrow–derived) and T- (thymus-derived) lymphocytes. They recognize foreign substances based on peptide recognition. The thymus is the main location for T-cell development; 95% of thymocytes are eliminated in situ or via apoptosis. There is increasing dysregulation with aging: thymic involution begins at birth and undergoes dramatic involution by 90% by age 60, beyond which thymic hormones are no longer detectable in serum.

The key and primary defect with aging is loss of helper T-cell function (due to decreased antibody response, decreased capacity to expand under threat, and incomplete differentiation). T-cells’ proliferative response to mitogenic lectins is blunted; other examples of its dysregulation include exhibition of aberrant characteristics with aging. T-cells are more likely to initiate apoptosis upon activation in older adults and are replenished more slowly.

Moving on to B-cells, Dr. Alibhai stated that their major role is to produce antibodies as part of the humoral response. With aging, this response is impaired qualitatively and quantitatively. Older adults have a blunted response to immunization, with poorer antibody response. Natural antibodies decline with age through B-cell loss, and the frequency of antigen response in B-cells decreases—not only are there fewer cells but over time up to 30% become nonfunctional. Other key changes include an increase in nonspecific IgG production; further, B-cells may be chronically activated and exhibit other forms of dysregulation. There seems to be enhanced autoimmune activity with aging, with an increased frequency of autoantibodies against organ-specific and non-organ-specific antigens. The clinical significance of these autoantibodies remains contested.

Additionally, Dr. Alibhai mentioned immunologic change to the mucosal system. With the caveat that good study data are lacking, he mentioned there appears to be degrading mucosal integrity with age, and also likely defects in local antibody production.
Regarding altered allergenicity, it appears that IgE-mediated hypersensitivity reactions are less common with aging, but this remains a hypothesis. Serum IgE production declines with age, and there is deficient IL-4 production, among other forms of dysregulation.

With age there is increasing dysregulation in the cytokine system—a complex series of interacting pro-inflammatory and anti-inflammatory proteins that help to regulate the immune system—and key alterations involve IL-6 (Figure 1). The age-associated increase in IL-6 is a major cytokine derangement, Dr. Alibhai stated, and may parallel chronic inflammation; this leads to bone resorption, may play a role in Alzheimer’s disease, and may produce excess mortality in the medium term. IL-1 production is decreased with aging, and IL-2 production and responsiveness are blunted. He noted that it remains unclear which cytokine changes are key, as no one acts independently. Over time there is more T-cell than B-cell response to infection with age. Not all changes are attributable to aging per se, and subclinical disease and/or environmental factors likely play some role. 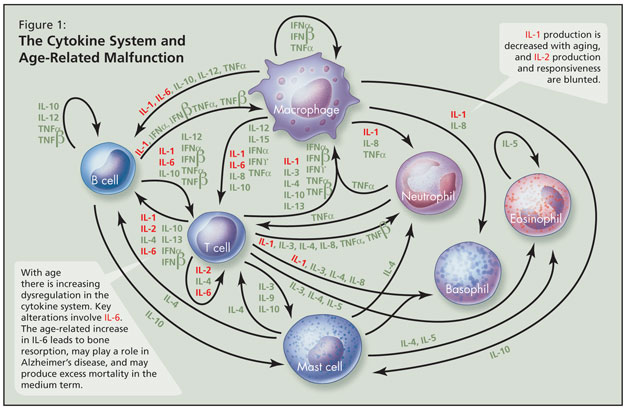 The clinical consequence is that older adults are more predisposed to infection but not overt immune deficiency. There is increasing risk of reactivation of dormant infection such as herpes zoster and mycobacterial infection. These risks are compounded by illness and malnutrition. Further, vaccinations are less effective and there is higher risk of parasitic infection.

Treatment options to reverse these aging changes are limited due to a paucity of high-quality, long-term studies, and safety and efficacy of potential therapeutic agents are not clearly established. Early evidence suggests the potential value of melatonin for increased antibody production, helper T-cell activity, and may be able to stimulate IL-2 release. Other data suggest that modified nutritional intake is associated with positive health correlates (e.g., enhanced immunity via increased intake of polyunsaturated fatty acids and vitamin E); further, there has been some benefit shown with modified immunization schedules (e.g., more numerous doses of hepatitis B vaccines in older adults) but larger studies are needed.

The next phase of the presentation concerned changes to the haematological system with age. Generally, concentrations of most blood constituents do not change with age. However, anaemia becomes increasingly common with older age but is not fundamentally age-related (body iron stores increase with age); instead, anaemia may be attributable to disease or other factors (e.g., subtle nutritional deficiencies). Haemoglobin levels may decline slightly with age, although this is still controversial. More importantly, the aged bone marrow cannot quickly respond to acute loss of blood. Thus it takes longer to correct acute anaemia by making new red blood cells. Dr. Alibhai reminded listeners that total white blood cell counts do not change with age, but response is blunted to stresses. Neutrophil and monocyte counts do not change with age, but lymphocyte counts decline slightly. With bacterial infections, there are paradoxical decreases in the number of and proliferative rate of neutrophil precursors, partly due to cytokine dysregulation. Older neutrophils are less able to migrate to the site of injury or generate antimicrobial oxidants in response to attack. Older lymphocytes are more vulnerable to radiation damage.

There may be some hypercoagulability and increased red blood cell viscosity with aging, but data are unclear.

Clinical implications of these haematologic changes include a higher predisposition among older adults to developing and sustaining anaemia in response to bleeding. He reiterated that anaemia is not due to aging and needs investigation. As for dangers of anaemia, he advocated that physicians beware of its association with fatigue, slower recovery after ADL disability, impaired executive function, depressive symptoms, increased hospitalization, and increased mortality. How much is causation versus correlation is an area of ongoing investigation.

Other clinical implications are that in individuals undergoing bone marrow suppression (e.g., with chemotherapy), colony stimulating factors (e.g., granulocyte colony-stimulating factor) are usually recommended for neutropenia prophylaxis in oncology settings.
In closing, he emphasized that most haematological indices do not change with age, and the noninvasive work-up for anaemia (ferritin, B12, RBC, folate, etc.) is equally sensitive and specific as in younger people. Dr. Alibhai drew particular attention to evidence that reticulocytosis is impaired with aging, that reticulocyte response to erythropoietin administration is blunted, and other bone marrow reserves are decreased in response to high demand.