The Need for an Improved Influenza Vaccine

The Need for an Improved Influenza Vaccine

Prior to addressing needed improvements in influenza vaccinations, Dr. Janet E. McElhaney reviewed the pathophysiology of influenza illness in older adults, highlighting the importance of cell-mediated immunity and how it might be improved through vaccination. In a younger adult with adequate antibody protection, the influenza virus is likely to be neutralized on the mucosal surfaces. These surfaces lose functional proficiency as individuals age, and the antibodies needed to fight infection may be of insufficient quality. Under these conditions the virus can replicate and spread quickly, invading the lungs, and pneumonia is a common outcome.

The age-associated decline in cell-mediated immunity correlates with a tremendous increase in late-life morbidity from influenza infections. The immune response to influenza is triggered when the virus is inhaled and proceeds to infect the epithelial cells lining the respiratory tract. In order to defend against the spread of infection, the T-cell response must be activated along with the interferons produced by cells in the respiratory endothelium in order to shut down viral replication.

Dr. McElhaney cautioned that the atypical presentation of illness, particularly in frail older adults, often leads to a missed diagnosis of influenza. She advised that fever and/or confusion might be the presenting symptoms, whereas cough may not be apparent at the time of examination or hospital admission. Pneumonia is a serious complication occurring in ~30% of influenza illnesses in older adults.
To further highlight the impact of influenza-related complications in older adults, Dr. McElhaney described profound disability and serious decrements in functional status as a consequence of infection. Of particularly adverse impact are the long-lasting constitutional symptoms that occur with flu. An individual with malaise lasting in excess of three weeks may experience a profound change in functional status. Periods of prolonged bed rest can translate to a loss of up to 5% of functional muscular strength per day. A single bout of prolonged influenza-related illness in an older individual can lead to a state of frailty.

Influenza vaccination is a cost-saving medical intervention as it reduces hospitalization and death rates due to pneumonia, exacerbations of heart failure, heart attacks, and strokes. A recently published study by Reichert et al. of predictors of excess mortality associated with influenza cycles found that peak months of mortality among older adults for ischemic heart disease, cerebrovascular disease, and diabetes mellitus coincided appropriately with peaks in pneumonia and influenza.1 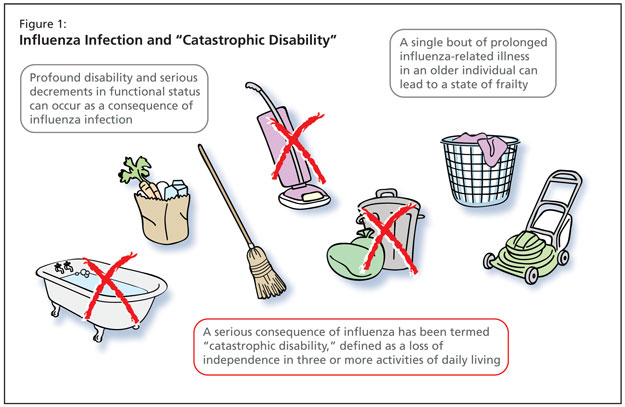 New influenza vaccines are needed in order to prevent this morbidity. There are real challenges to this objective, however. Dr. McElhaney acknowledged that, currently, the content of split-virus vaccines can vary significantly from one manufacturer to another. This may affect the T-cell responses that can be stimulated to these vaccines.

Killed vaccines offer effective antigen presentation to T-helper cells that activate an antibody response but cytotoxic T-lymphocytes (CTLs) are poorly stimulated by these vaccines, and in current vaccine development efforts, research is aimed at stimulating both helper T-cells and CTLs. Helper T-cells produce cytokines that play an important role in the activation of CTLs, which combat influenza viral infections by recognizing and destroying virus-infected host cells that have become sites of viral replication. It is necessary to supply antibodies that come and bind the extracellular virus. In older adults, stimulation of T-helper cells in the local lymph nodes tends to stimulate TH2 cytokine responses, with interleukin-10 being produced. Research has simulated this kind of environment and shown that in cell culture systems the addition of inflammatory cytokines that increase with aging can promote this response. Other cells go on to become infected as it is a challenge to eliminate virus-infected cells. Current efforts aim to develop a vaccine with greater TH1 and interferon gamma production.

Where those same inflammatory cytokines have been turned on, instead of adding them directly to the culture the research she has been involved in has orchestrated their production using toll-like receptor agonists. They are on the antigen presenting cells, making them more effective. The stimulation with those TLR agonists in the culture with the vaccine will promote this such that the CTLs will kill those virus-infected cells by this granule-mediated process.

Dr. McElhaney described ongoing work to develop assays for granzyme B that have been correlated with protection. Granzyme B is produced in cytotoxic T-lymphocytes and is a key mediator of cytolytic activity against virus-infected cells. Through validation of the assay they have shown that this a sensitive measure of the CTL response to vaccination as well as the interferon gamma to IL-10 ratio.
Influenza is a serious illness and is an often missed diagnosis in older individuals due to age-related changes in the immune response to influenza. Complications of influenza go beyond pneumonia and include cardiovascular morbidity, iatrogenic complications, and risk for catastrophic disability resulting in frailty. The true impact of the disease is not totally known, and efforts must continue toward improving current vaccines as treatment strategies for influenza cannot ensure a positive health outcome.

Sponsored by an unrestricted educational grant from sanofi pasteur.