Measurement of Protection: How Do We Determine How||Well the Vaccine Works?

Measurement of Protection: How Do We Determine How Well the Vaccine Works?

Most evidence-based data drawn from the North American experience with vaccination are taken from observational studies as the major U.S. and Canadian regulatory bodies called for a halt to placebo-controlled trials, given the evidentiary weight for the benefit of vaccination programs.

Despite the clear ethical benefit to the injunction, information about vaccine utility is still required from randomized controlled trials. Questions continue to be raised as to how well current vaccines protect against infection due to factors such as antigenic drift. Placebo-controlled studies are still conducted internationally and can serve as a valued source of information. Dr. McGeer described several such trials.

First she detailed a Dutch study that aimed to determine the efficacy of influenza vaccination in older adults. The randomized double-blind placebo-controlled trial involved fifteen family practices and a total of 1,838 healthy subjects age 60 years or older. The researchers found that among those study participants age 60–69 the vaccine was 57% effective in preventing influenza; among those individuals over age 70, efficacy dropped to 23%.1 A similar study in Thailand that sought to determine the efficacy and cost-effectiveness of influenza vaccination in older Thai adults living in an urban community found that in individuals age 60–69 efficacy was 67%; at age 70 and over efficacy dropped to 34 %.2 A third trial from Malaysia looking at vaccine efficacy in long-term care facilities supported influenza vaccination of persons with chronic diseases and >50 years of age living in institutions.3 They found that vaccination was 75% effective in preventing influenza-like illness.

Because the success rates sound modest, Dr. McGeer acknowledged that scepticism about vaccination persists. She advised that as or more important than efficacy rates are the numbers of individuals protected from disability and death, as well as the cost-effectiveness of the vaccine and vaccination programs. She cited a Swiss study focused on influenza-attributable mortality in which investigators found that vaccination led to very substantial decreases in mortality.4 She pointed out that the benefits of increasing vaccination have been documented by the Public Health Agency of Canada. In the 1980s, an average of approximately 7,500 deaths was attributed to influenza each year. With increasing vaccination rates, the estimated annual number of deaths dropped to 4,500 in the late 1990s. While further improvements are necessary, Dr. McGeer emphasized the direct benefits related to that drop. For those over 65 years of age, vaccination saves lives, prevents hospitalization, and saves $17/person in direct health care costs.5 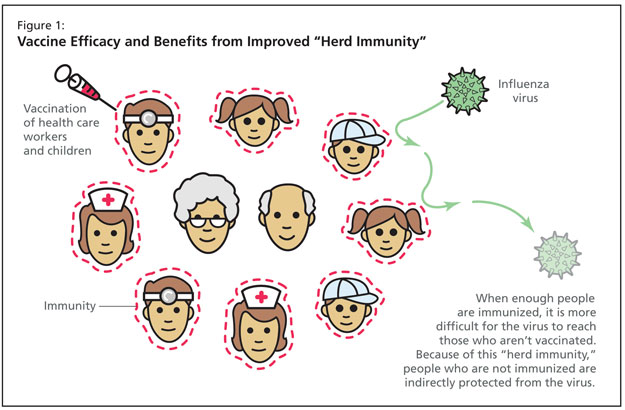 Dr. McGeer pointed out that some gains could also accompany improved diagnosis and treatment. During the peak of influenza season, more than 20% of patients presenting to the emergency department with fever and any cardiac or respiratory diagnosis have influenza. Since treating severely ill influenza patients with antivirals reduces the risk of mortality by 70%,8 improved diagnosis and therapy may improve outcomes, and reduce morbidity and mortality.

Finally, Dr. McGeer emphasized that, while improving vaccination rates with existing vaccines, and improving diagnosis and management will have an impact on the burden of influenza, the true benefits lie with the development of new vaccines that would offer improved efficacy in older adults. She referred discussion of new vaccines to the final symposium speaker, Dr. David Greenberg.

Sponsored by an unrestricted educational grant from sanofi pasteur.