Learning from Our Mistakes: Using Errors to Improve Care

Learning from Our Mistakes: Using Errors to Improve Care

Dr. Brian Wong began by acknowledging the breadth of the topic of patient safety. Traditionally, he noted, training and focus on this area has been poor; now, it is receiving increasing levels of recognition.

The value of medical errors lies in their capacity to inspire change to the health care system. The case of Libby Zion is one of the most renowned and has led to universal limitations on the number of hours both continuously and per week that a resident may accrue on shift without rest. Zion, an 18-year-old woman, was admitted to a New York hospital suffering from vague symptoms and died within hours of her arrival. It is now generally accepted that Zion died at least in part from complications of serotonin syndrome, caused by a combination of meperidine and phenelzine. The resident in charge, who worked a 36-hour shift, was ultimately cleared of fault, but the long hours worked by young residents were an object of blame during litigation. As a consequence, academic medical centres in the U.S. widely adopted guidelines that mandate 80-hour limits to residents’ work weeks. Dr. Wong termed this a striking example of how one event has led to system-wide change. All adverse events have potential to improve patient care and safety, Dr. Wong stated.
Dr. Wong drew attention to six principles set forth in a report from the Canadian Patient Safety Institute that articulated patient safety competencies. Its principles mandate that health care professionals: one, contribute to a culture of patient safety; two, work in teams for patient safety; three, communicate effectively for patient safety; four, manage safety risks; five, optimize human and environmental factors; and six, recognize, respond to, and disclose adverse events.

He encouraged health professionals to better define the concept of an adverse event, describing it as “an event which results in unintended harm to the patient and is related to the care and/or services provided to the patient rather than to the patient’s underlying medical condition.” Fundamentally, he described it as something that occurs, unintentionally, either as a result of behaviour or lack of intervention. An event becomes a medical error if it can be seen as an “act (plan, choice, decision, action, or inaction) that when viewed in retrospect was not correct and resulted in an adverse event or a close call.” By contrast, a “close call” is a near-miss event “with the potential for harm that did not result in harm because it did not reach the patient due to timely intervention or good fortune.”

As for the prevalence of error, Dr. Wong noted a landmark report from the Institute of Medicine entitled To Err Is Human (2000), which estimated that up to 98,000 lives are lost annually as a result of medical error. Numerous national and international studies have looked at patient charts and screened for adverse events. The Canadian Adverse Events Study found that ~8% of hospital admissions are associated with adverse events; ~3% were preventable. Given this prevalence, Dr. Wong stated that anyone who works as a health professional in the hospital setting will eventually note errors. If one is witnessed there is sound reason for reporting it; the goal is to allow system-wide learning and performance improvement to take place, and to prevent future harm.

Dr. Wong advocates that all three categories of errors (adverse events, medical errors, and high-risk near misses) be reported. While, upon query, most listeners concurred, he acknowledged that errors are not universally reported. The reasons are multifactorial: one, errors are not always recognized as such; two, there may be some fear of punishment or legal recourse; three, there may be a perception of the cumbersome nature of error reporting or staff may not know how to report an error; troublingly, there may be perception that error reports are not reviewed/acted upon. Dr. Wong emphasized that reporting is not equivalent to disclosure (defined as telling a patient that an error has occurred).

Dr. Wong offered the audience instruction in a technique to improve quality and safety (Figure 1). This involved presentation and practice with an error prediction and analysis tool known as Failure Modes and Effects Analysis (FMEA). This tool, taken from the field of engineering, predicts steps in a process prone to failure by using rational assessment measures of risk of error and harm; FMEA also aids in identifying the most important areas for process improvements. 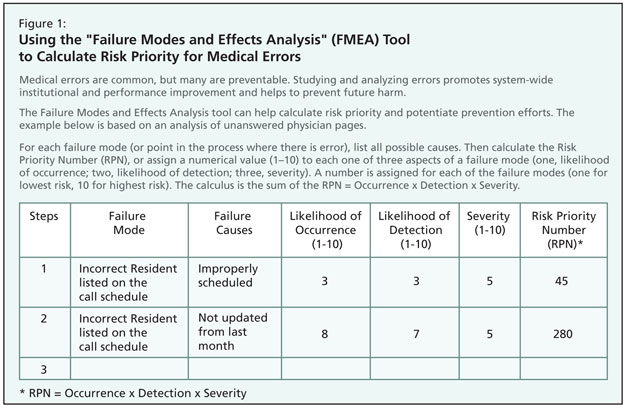 Working with this tool in clinical practice could involve reviewing an instance of medication error—for example, provision of an incorrect dose of insulin. How could patient safety in insulin dosage administration be improved? The FMEA analysis is a means of calculating every step of the process that involves insulin administration, illustrating where an error could occur.

The first step is to map out the process, producing an algorithm of action. This produces a flow-chart representation of the process as it currently exists. Step two is to “Assign Failure Modes.” For each step in the process, one lists all possible “failure modes” in the process, or anything that could go wrong. For each failure mode, list all possible causes. Step three is to “Calculate a Risk Priority Number” (RPN), or assign a numerical value (1–10) to each one of three aspects of a failure mode (one, likelihood of occurrence; two, likelihood of detection; three, severity). In this final step, a number is assigned for each of the failure modes (one for lowest risk, 10 for highest risk). The calculus is the sum of the RPN = Occurrence x Detection x Severity.

The higher the number, the higher the priority. The FMEA tool should highlight areas to target improvement efforts.

Dr. Wong concluded with the hope that the tools presented would aid in identifying situations when a medical error has occurred and recognizing when errors should be reported, and promote better understanding of the important role error reporting plays in improving patient care.