More Than Child’s Play: Ethics of Doll Therapy in Dementia

If one is in medical practice long enough it sometimes seems like that sense one gets when sitting in a waiting room and picking up a years old copy of Time® magazine and not realize that it is years out of date, as many of the stories seem to be the same or very familiar. I have a 30 year old tuxedo which fortunately comes in and out of vogue cyclically which allows me ( as long as appropriate size accommodating alterations have occurred) to keep wearing it without my feeling that I am “out of fashion”.

The challenges that face all practitioners and family members who care for those living with dementia are myriad. Cognitive impairment and behavioural issues top the list of concerns expressed by families, with the second layer being impairment of activities of daily living which requires assistances in many basic domains. Over the years the approaches to care especially for those with the range of behavioural issues which might range from withdrawn apathy to agitated aggression and disruption of other people’s function and privacy. The latter often becomes a problem in congregate living situations and may lead to crises when the facility expresses concerns about the ability to continue care of others’ lives are negatively affected.

In this question for methodologies to decrease these negative or as recently renamed “reactive” behaviours, the typical “medical” approach has generally been pharmacological. This has spawned a whole drug-based industry including regulatory attempts to modify and curtail the use of such medications because of evidence-based negative consequences of the medications which are often additional to the risk of the underlying disease itself. Psychologists, social workers, recreational and music therapists have all added over the years various modalities of interventions with the hope that they might individually or in combination might more safely decrease the degree of behavioural problems without compromising the person’s function, dignity and quality of life.

With this in mind it was refreshing to see recent references to programs in which “doll therapy” was being utilized as a modality to address some of the behavioural manifestations of those living with dementia living in long-term care facilities. The article that brought the program to mind was recently published in the Feb. 3, 2014 web-based article from Nursing Ethics where the focus of the article was on the ethical implications of the intervention more that the efficacy and clinical impact of the use of dolls in BPSD and other manifestations of those living with dementia. 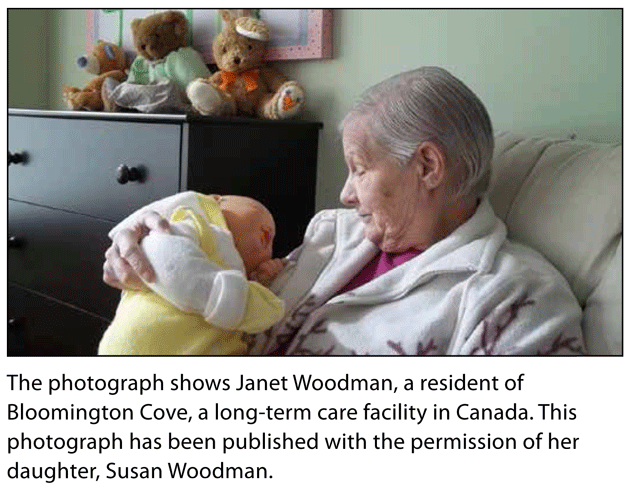 It is of interest that the focus of this particular article was on ethics rather than clinical outcomes. One can of course implicate ethics in all clinical interventions in terms of goals, benefits and risks as well as the foundational principle of ethics; autonomy, beneficence, non-maleficence and justice. When one thinks of alternative pharmacology based interventions for BPSD it is hard to imagine how they would measure against interventions whose adverse reactions or almost exclusively of an “ethical premise” rather than manifestations that can affect the clinical outcomes of the disorder with significant adverse cardiac and other documented potential side effects as well as movement disorders. Other articles on the subject of doll therapy and other alternative non-pharmacological modalities of intervention for BPSD seem to be less focused on the ethics than on the efficacy of the intervention and the multiple benefits to the general emotional well-being of the individual beyond the issue of BPSD.
0
No applauses yet