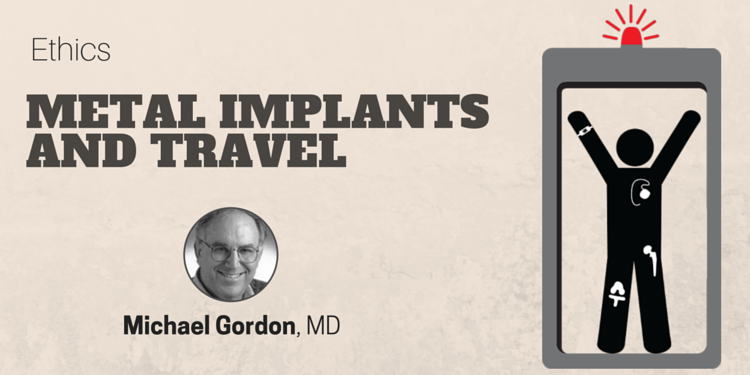 Many older patients of mine have metal implants in their limbs following some form of reconstructive surgery. It is the age of the bionic person.

I recently had a comparable experience when flying, which I do quite often. I had acquired a MedicAlert bracelet, which also is a common accoutrement of many older patients. As I passed through the security arch having already removed all my usual triggers (phone, wallet, belt, watch), the alarm went off—I realized that the Medic-Alert bracelet, whose clasp is such that it is very difficult to open, clearly for safety reasons, was the culprit. I mentioned it to the agent—who took his wand and clearly identified the source of the alarm, and when he finished the rest of the scan, he let me through without any problems.

I was curious and perused the medical literature on the subject, given the high prevalence of seniors with metal in their bodies—part of the contemporary miracle of modern medicine. I recall a time when severe knee and hip arthritis left seniors either completely immobilized or chronically racked by significant, often life-altering pain.
It is not that the surgery is "easy," and it's not always successful, but for many, it can have a dramatic and long-lasting beneficial effect. No less important than the surgery itself is that there seems to be a very flexible ceiling on age—with some very elderly individuals found suitable for surgery—depending on what other medical conditions exist.
Many of the articles that discuss the issue remark on a practice in the past, when patients with metal hardware in their bodies often provided the security agents with letters or cards attesting to their condition. However, it is now felt that these are not needed nor heeded, as there is no way of verifying the veracity of the author—and the backup metal detector or full body scan will do the trick more effectively and assuredly.

What most of the articles on the subject suggest is that the traveller should alert the security agent right up front about the issue rather than waiting for the detector to go off. I thought of having the clasp on my MedicAlert bracelet changed to one that could be more readily opened and closed but decided that the security of a bracelet that could not readily inadvertently fall off was more important than the minor inconvenience of a manual security scan.

Some things, we often say, just "come with the territory." Travel has become more complicated because of issues of security. There is no doubt that the recent tragic bombing of a passenger plane in the Middle East will result in either more intense scrutiny of travellers or some new directives on screening—just when things seemed to be easing up in North American airports.

Medicine has become more complicated because of novel treatments that, although life enhancing or life saving (such an internal heart pacemaker which also has metal wires), may cause some modicum of inconvenience at the security gate when people travel.

This seems to be a small price to pay to achieve both desirable ends—being able to walk unattended through a security gate after restorative surgery, and making sure that fellow travellers are safe in their travels.

Still, during those years when I was studying medicine all this would have been in the realm of wild imagination.

This article was originally published online at http://www.cjnews.com/living-jewish/travel/do-metal-implants-hinder-your-ability-to-travel