Beyond Medications for Dementia 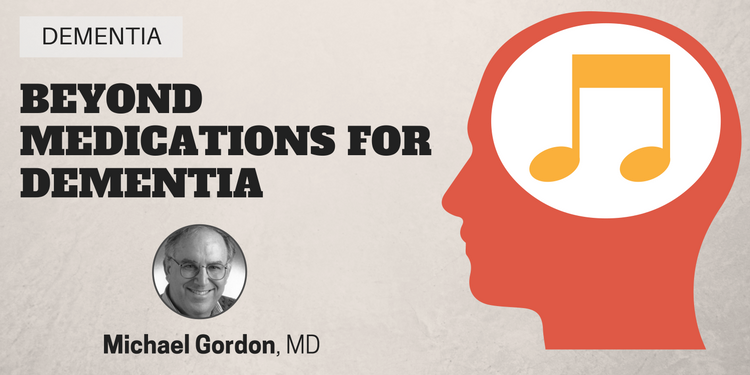 Physicians usually become adept at choosing medications for the complaints and illnesses that patients bring to their attention. Doctors have to become familiar with the common medications that are indicated for the most prevalent illnesses they see, and there are many resources available to keep physicians as up to date as possible on the most effective drugs and what the medical evidence says about indications, side effects, drug interactions and priorities of care at various points in the progression of a patient’s illness. In the elderly, there are often a number of illnesses competing for possible medical attention and intervention.

Dementia is the umbrella term used commonly to describe the cognitive decline that affects many older individuals. It may be due to a number of recognized conditions of which Alzheimer’s is the most commonly recognized, but the effects of blood vessel (vascular) disease are also very common factors in the aging population.

There are some medications for these conditions that affect memory, judgment and behaviour, the symptoms of which may cause great strife in the individuals affected as well as their families. The symptoms often cause immense challenges when it comes to the use of possibly helpful medications. The pharmaceutical products available for improvement of memory and judgment are often helpful in some individuals, but even when they are effective, they do not “cure” the cognitive impairment. They may, however, provide some improvement in certain aspects of cognition and especially socialization and interactive abilities.

Most challenging are the medications available for what are called behavioural manifestations of dementia, so much so that decisions to transfer to protective living environments such as nursing homes may be the result of such behavioural processes. These events may occur periodically and in what appear to be unpredictable outbursts. Although there are medications that are often used under such circumstances, which may be effective in decreasing the intensity of the disturbing symptoms, they—as do all medications—have potentially bothersome side-effects that may limit their efficacy.

During the past few years, the medical and non-medical health-care professionals involved in such care decisions have discovered that a number of non-medication interventions may be very effective and helpful without the risk of medication side-effects. Probably the most well-acknowledged and studied has been the use of individualized music, which has been shown to quell some of the agitations and disruptive behaviour associated with dementia. There are programs through the Alzheimer societies that provide personalized music on small iPods that can be used during episodes of behavioural outbursts.

In addition, there has been an expanding experience of using a range of alternative treatments such as pet therapy and doll therapy. In the latter, agitation, primarily in women, can be calmed by providing a life-like infant doll that brings out the calming and nurturing reactions many older women experienced during their earlier maternal days. Massage therapy and aroma therapy have also been used with good results in certain individuals.

The importance of these alternative therapies is that, unlike medications, they usually do not have side effects that might limit their effectiveness. They often tap into aspects of the person’s residual abilities that bring out what might otherwise be hidden aspects of his or her personality. Of greatest benefit is that these therapies are often provided by concerned and loving family members or dedicated health-care professionals, thus enhancing the social aspects of care that have been identified as being important through the course of conditions responsible for cognitive impairment.

Just imagine listening to one’s favourite music with an affectionate cat on one’s lap, while someone who cares enough provides a hand massage, rather than a dose of a medication that may cause drowsiness, increase the risk of falls and impair the person’s ability to walk securely. It may not always work, but it is always worth a try. So it’s important to be persistent and see what might work.


This article was originally published online at http://www.cjnews.com/perspectives/opinions/beyond-medications-dementia