Abandoning Treatment Due to Age Alone 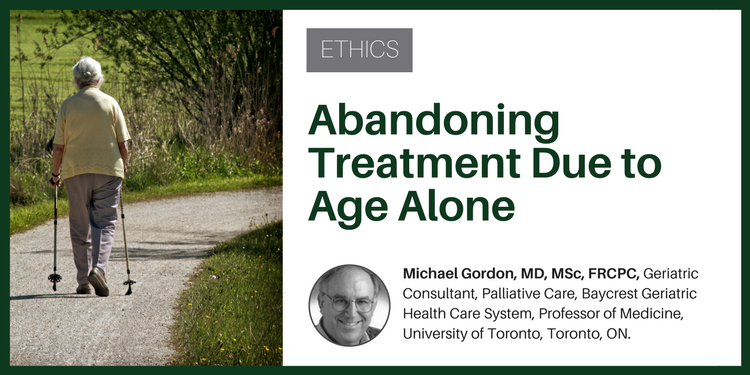 When caring for older adults with comorbidities, especially those at the extreme upper limits of life, it may be easy for providers to lessen the intensity of their curiosity and medical investigation. For some older individuals’ chronic conditions, the odds of a positive outcome may seem too distant or the patient’s discomfort—or, in many jurisdictions, the financial burden—may act as a barrier to the pursuit of answers.

Sometimes it can seem like the answer itself is unlikely to result in any meaningful benefit to the patient. When providers see an older patient with what appears to be a chronic condition, who is physically and mentally declining, it is not unusual for the provider to just accept it as a natural consequence of extreme aging. Patients themselves and their families are willing to accept futility as well, even if reluctantly, when the “verdict” comes from a physician—especially if it is a “specialist.”

One such example of this kind of case—what might be called “beneficent ageism”—occurred in my ambulatory geriatric practice. The patient was 95 years old when I first encountered her in my office accompanied by two devoted daughters who were committed to her care and fixated on the task of trying to allow her to live out most of her life in the communal home (one daughter lived with her with her family and the other lived close by). They were truly doting children.

The patient’s main complaint was cognitive impairment, and she fit the usual criteria for mild dementia with a range of vascular risk factors—she actually was started on and responded modestly to donepezil. With this positive result, it became clear that she had other bothersome symptoms that had, over time, been attributed to her age. For example, she became easily short of breath and had been to emergency rooms (ERs) over the years with what had been construed as heart failure due to a mixture of hypertension with (what seemed to be) mild chronic lung disease of uncertain etiology. She was maintained on the usual collection of vascular enhancers and pulmonary puffers, which afforded her some comfort with the acute episodes that had resulted in ER visits—an extra dose of furosemide and some intensive bronchodilator therapy.

She also had modest anemia, which had never really been looked into and seemed merely incidental. It was treated intermittently with blood transfusion for which no clear etiology was found—she had normal blood levels of B12, folate, and iron but a moderately low ferritin for which iron had been given with minimal benefit to her hematological parameters.