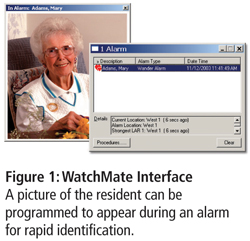 The Bess and Moe Greenberg Family Hillel Lodge is a 100-bed facility providing long-term care services and a traditional Jewish program to the community of Ottawa and its environs. Founded in 1965, Hillel Lodge relocated to a newer and larger building in 2000 to accommodate the needs of its 100 residents. Among the many improvements of the new facility was the addition of an electronic wander prevention system to protect residents prone to wandering.

Hillel Lodge typically cares for three to five residents prone to wandering at any one time. These residents may reside in the secured special care unit or in any of the three other units in the facility. Each exit from the Lodge is protected by a door monitor that is activated when a resident wearing a special bracelet approaches an open door.

While this system has been generally effective, there were areas for improvement identified by the staff. Hillel Lodge is a multifloor facility, with all 13 exits monitored by the wander prevention system. Previously, when an incident occurred, it was not always possible to know which exit the resident had used.
As a result of this concern, the Lodge undertook to upgrade the wander prevention system in early 2005 to provide full identification of residents in an alarm situation. The solution was a PC-based software package provided by Xmark (www.xmarksystems.com), the vendor of our wander prevention system. The WatchMate® software connects to the monitor devices installed at each exit. When a resident wearing a bracelet device approaches an open door, the software displays the location of the alarm and the name of the resident. The information is displayed in a clear, graphical format, including a floor layout of the facility.

Since its installation in January of this year, the software has improved response times when the alarm is sounded and provided staff with more complete information. A brief glance at the screen tells the staff responsible for monitoring the system exactly which resident has triggered the alarm and precisely which exit he or she has accessed. It removes guesswork and does this without delay, ensuring that the resident can be returned to safety in the minimum possible time.

This article was written with the cooperation of Xmark.