The Alzheimer’s Disease Symposium: Immunotherapies, the Question of Cures, and the Amyloid Hypothesis

Noting that disease treatments tend to reflect prevailing pathological hypotheses, Dr. Relkin observed that current drug therapies for AD reflect the so-called cholinergic hypothesis of the previous few decades. Today, most studies focus on the role of beta-amyloid, and there are presently more than 30 trials underway that pursue the amyloid hypothesis. These research approaches encompass the transcription and translation of the APP gene, the production of amyloid monomer, the aggregation process, the formation of diffuse plaques in the brain, and the inflammatory processes that convert the formation of plaques in the brain associated with AD.

Dr. Relkin reminded listeners that immunotherapy is a class of treatments, not a single therapy. Immunotherapies include any approach that harnesses the actions of the humoral (B-cell mediated) and/or cellular (T-cell mediated) immune system. Immunotherapy initially came to the fore after Dr. Dale Schenk and colleagues found that an amyloid “vaccine” reduced the burden of plaques and memory loss in a transgenic mouse model of AD. The effect was demonstrated in the case of established plaques as well, despite the former thought that plaques were immutable.

The first use of antiamyloid immunotherapy in humans with AD showed similar clearing of amyloid plaques. However, due to a harmful T-cell mediated response, an unacceptably high number of patients developed meningoencephalitis. Subsequently, researchers sought to define and preserve the benefits of vaccination and eliminate the harmful response.

Dr. Relkin then described a developing approach called passive immunization, which involves supplying antibodies from an exogenous source, i.e., synthetic or animal. Dr. Relkin also drew attention to immunomodulation, a strategy that does not use the immune system directly but instead its chemical messengers, such as cytokines. All of the forms of immunotherapy he described are being pursued in current research. 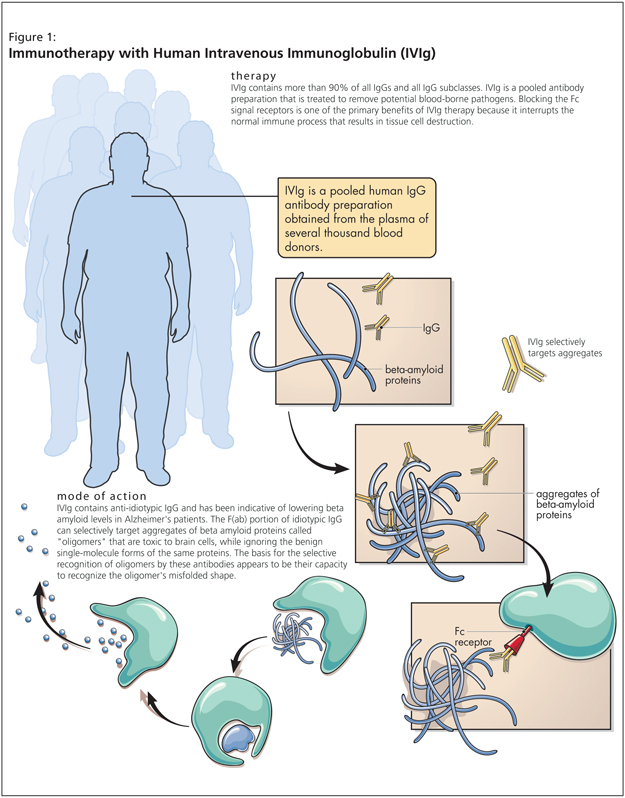 Motivated by the safety concerns of amyloid immunotherapy, IVIg holds promise as something time-tested. IVIg is a pooled human Immunoglobulin G (IgG) preparation obtained by cold ethanol extraction from the plasma of thousands of healthy blood donors. It is already in use as a treatment for a number of immune deficiency disorders and other syndromes. IVIg contains natural antibodies, including antiamyloid antibodies.

Research data suggest that AD patients have fewer antiamyloid antibodies than nondemented individuals, making IVIg potentially valuable for such patients. IVIg has an established safety profile and is less likely than other immunotherapies to cause untoward events.

Dr. Relkin further detailed positive findings from his own research and that of Dr. Richard Dodel in Germany. Both studies’ Phase I data reflected a symptomatic benefit generated of IVIg over a 6-month period (these were add-on studies for patients under treatment with other agents), lowering the levels of amyloid in the blood. In the Relkin et al. study, a single IVIg low dose was followed by three higher doses. Each time the levels of antiamyloid antibodies were raised, there was a comparable impulse function in plasma amyloid curves. Dr. Relkin also presented data from his 18-month extended study. Significant results included marked decreases of the level of Ab40 and Ab42 in spinal fluid. Dr. Relkin then added a Mini-Mental State Exam measure to the study for safety purposes. He noted that the most robust response was seen among patients receiving the lowest doses of IVIg; a high number of low dose treatments also yielded positive results, in contrary to higher doses IVIg. Results were beyond expectations, the key finding being a disease stabilization effect over 18 months, Dr. Relkin stated. Given the positive interim results, they have announced they will be going to Phase III early in 2008.

Dr. Relkin noted some “paradoxes” in these data. Why do we have antibodies in our blood against Ab? Amyloid is a physiologic peptide we all produce from birth, for which the immune system should show tolerance. Researchers experimented with adding IVIg to Ab solutions in vitro: no binding response was exhibited. The response is mediated in the body by the effect of aggregation: amyloid can form soluble aggregates called oligomers, which are the targets of an antibody response. There is a peak of response corresponding to mid-sized oligomers, which means that the antibodies in IVIg are ignoring monomeric (benign) molecules and instead focusing on and binding to what Dr. Relkin described as very toxic species of reactive Ab. The “bottom line,” Dr. Relkin stated, is that the body is not indiscriminately fighting amyloid-it recognizes its toxic and misfolded forms.

The promise of this research, Dr. Relkin stated, is that oligomers are suspected to be the causative factors of a number of neurodegenerative diseases (AD, dementia in Down Syndrome, Lewy body dementia, Parkinson’s disease, Huntington’s, and others). These proteins circulate normally, but the oligomers represent pathological forms. This research suggests that there is an innate biological defense against neurodegenerative diseases, and IVIg holds promise as a tool to aid the fight (Table 1). 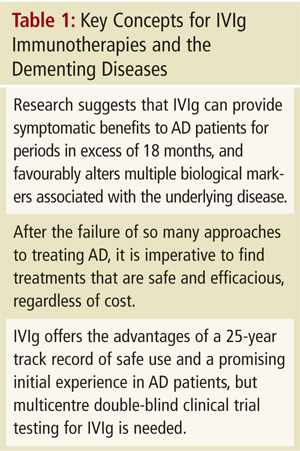