Are Evidence-Based Medicine and Anecdotal Medicine at Odds with Each Other?

For any physician beyond 70 years old, of which I am one, evidence-based medicine as currently configured and taught is a concept that came to us somewhat late in our careers. Despite having a solid scientific education in high school and then later at University even though the latter also exposed me fortunately to a wide range of liberal arts subjects, evidence-based medicine was a late addition to how I configured and digested medical knowledge.

I studied medicine at the University of St. Andrews (Dundee campus), which is a very old and venerable University and medical school. Dundee which was a remnant of the industrial revolution and pre-war depression during the 1960s when I was there as a medical student and had not risen from the ashes of the end of its core industry, the turning of imported jute into carpet backings: the industry was outflanked by the new synthetic materials that replaced jute in the carpet industry. It was a poor city, with a substantial working class of factory workers and construction workers, with those whose livelihood was from the trades. Because of its connection to the famous University across the Tay estuary and a thriving College of Art and some other fine educational facilities it also had a significant educated and fairly well-off financially tier to its population.

Medicine was taught in the very old Dundee medical building in the then traditional manner: we had lots of lectures. The lecture halls were very steep with wooden benches and long desks, laboratories with either microscopes for pathology, electrophysiological gizmos that still made recordings on paper that was covered in essence with soot and frequent visits to the autopsy room. Our professors and lecturers varied from well-known authorities who bored us half to death as they in essence read from their only occasionally updated notes, or from their own textbooks if they had written one, to some younger lecturers who tried to bring more excitement into the class, but still provided mostly information/knowledge that one could get from the standard textbooks on the subject they were talking about. When we started our clinical rotations, it was in small groups and as we gathered around the patient with our instructors we listened intently to their knowledge and occasional pearls of clinical and experiential wisdom. What was often heard was, "in my experience" or "it is known that" but virtually never, "the evidence shows" or "the latest meta-analysis of the recent studies on…" reveal that. The idea of using what would now be called evidence-based medicine did not really exist: it entered my own vocabulary and construct of knowledge and translation into practice 15 or 20 years after my graduation in 1966.

In the early days of the EBM craze I often felt a hiatus in my teaching and learning when most of the educational sessions I attended were peppered with "evidence" often applied to the new medium of the PowerPoint presentation. I realized what I was missing were the "stories" of medicine. I recalled vividly our professor of Medicine who was the Physician to the Royal Family when they sojourned in Scotland: he was a great story-teller. When he gave a lecture, with an anecdote not infrequently with a vivid background of history and geography as its anchor, it was never forgotten with the essential points embedded in the story that became very personal and meaningful as it related to individual people, and not just "groups of study subjects". 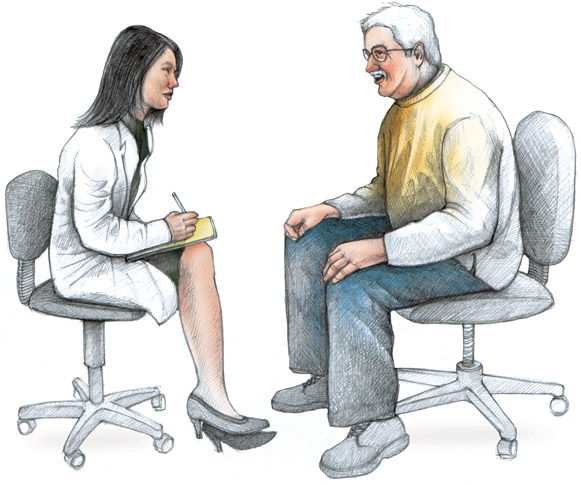 With this in mind I was delighted to see a recent article in the New York Times entitled "Why Doctors Need Stories" (http://opinionator.blogs.nytimes.com) Even though the focus in this article was on mental health issues and psychiatry, the essence of the article was the importance of stories woven into how doctors practice medicine. For patients it is very important to not just know the "science" and "evidence" of medicine but to understand the physician's personal view and experience with whatever the illness is. Patients very commonly after a physician explains the "evidence" ask, "What in your experience is the best thing to do". That is the question that physicians must be able to answer beyond the "evidence" as personal observations and experience matter a lot not just to practicing physicians, but also to the individual patients they care for. Abraham Varghese the renowned physician author of Cutting for Stone, captures the importance of touch as part of the physician's instruments of care and emphasizes this through the importance of his many narratives in his Ted Talk on the subject (http://www.ted.com).

At the end of the day, our patients need not just our knowledge, but our wisdom which is beyond the recitation of the "evidence" from the world of science: what they also need are our narratives, our individual and collections of personal observations and experiences. It is those stories, which may include us as the subjects of the tales, to confirm our humanity to our patients, but also give them a link from the science of medicine to the people to whom medicine is meant to serve.